The second in a series of 5 EPs. A collection of some lo-fi jams I put together during various late nights at the apt in Hell’s Kitchen. These were recorded on 4-track cassette with a little post-production. Artwork collage is mine as well, some paper and glue on an LP jacket, comprised of various bits of my friends’ artwork that I’ve kept over the years.
credits

STAND ON THE WORD! It is such an honor for Lost Souls of Saturn to work with the legend Louie Vega and his Elements of Life project on this classic track. It can now be heard as part of the album and the 12″ vinyl single is forthcoming.

This is day 2 of a gallery event as an album release/label launch. On Saturday the 4th, we are all playing ambient sets and you should come zone out with us.
TICKETS HERE

On Jan 3rd & 4th, 2020, we’re having an album release and label launch event/gallery show in Manhattan at the amazing 393NYC space with some of my favorite friends and artists showing their work.

Friends, I am thrilled today to announce my new imprint, Butcha Sound Records, starting with two solo albums totaling 5 hours of ambient, abstract, and noise tracks. They will release on January 1st, 2020. The bandcamp page is up now for previewing and preordering. These albums will be available Digitally, 2xCD each, and photographic prints of the paintings on the covers by my friend and collaborator, Greg MacAvoy. I would be grateful for your support, but more importantly my intent is that these albums inspire you and manifest PEACE in your world.

A portion of proceeds from these albums and everything on Butcha Sound will go to arts education causes.

‘Meditations for Peace’ consists of 2.5 hours of ambient pieces intended to manifest peace in your life and the world around you. Tape experiments, keyboard improvisations, and forgotten studio dream-moments comprise the collection. I came up with the idea for this collection after getting home from the memorial held for David Mancuso on February 14th, 2017. I thought about his message, the therapeutic power of music, and bringing people together through sound and environment. I realized the importance of making and playing music with intent, and I was incredibly moved by what I experienced that night and at The Loft the few times that I’ve been. These songs serve as a focal point for your meditation practice or drifting off into the greater subconscious.

‘Pieces For Painting’ – Speaking to my painter friends over the years helped me to realize this project. These are pieces I imagine would be interesting to have on in your art studio while you work. This includes 2.5 hours of equipment abuse and misuse, late-night journeys into the abyss, and the audio component of several art installations. They are a bit more atonal, weird, and dissonant than the companion album, Meditations For Peace. Zone out to it, create to it, imagine a twisted sci-fi movie in your head – it’s all good.

Livicated to my students for keeping me young and inspired.

A portion of proceeds from this album and everything on Butcha Sound will go to arts education causes.

posted on December 9, 2019 in Releases with 0 comments

New solo project alert! This Beat Tape represents a year of late night 4-track cassette joints I made in my living room in Hell’s K. I am personally attached to this block, building, and neighborhood through my family who have been in this town for generations. This is a bit different than the music you may know from me, with heavy doses of hip hop, experimental, ambient, house, and skits. Stream Side A now on the Most Excellent Unlimited bandcamp. Shout to Paul Raffaele for hearing it and having the vision for the tape. Peace.

LSOS is the cover feature in the October issue of Mixmag and for their first time, it also works with AR! Get the LSOS app for your device and see the future.

We’ve had quite a year with the LSOS project. We began the year with 2 singles on R&S Records, performed in Europe, and installed Transmission – a multimedia album experience in collaboration with some amazing people – during Art Basel week in Switzerland and at the Saatchi Gallery in London. We also put together our first book, the LSOS augmented reality app, and finally released the album on LP.

Might want to check out the Lost Souls Of Saturn website for more info on the project.

Lost Souls Of Saturn – The Awakening

Conceived and directed by Kieran Behan and Marie Alice Wolfszahn, ‘The Awakening’ was filmed in Petra and Wadi Rum, Jordan, where the cast and all-female crew were granted special access to these ancient sites. This cinematic expression combined with otherworldly sound design channels surreal metaphors, exploring the boundaries of reality.  The short film follows the quest to trigger revelations in psychic entanglement by disrupting transmissions from the malevolent Holoverse – a frequency that is used to enslave minds and generate oppression. Our heroine Astraea, played by Sina Kempe, was the last of the celestial beings to leave Earth after witnessing the degeneration of mankind. She is called back in a symbolic meeting of the past, present, and future after receiving signs from the Messengers, beings of light, in the sands of time.  Prior to Lost Soul Of Saturn’s eagerly-anticipated debut album, ‘The Awakening’ film throws the doors of perception wide open, for the first time letting people fully enter into their vast realm – one which is rich in symbolism, intrigue and narrative.

‘The Awakening’ single released on vinyl, download and stream via R&S Records on 26th April 2019

posted on April 2, 2019 in Uncategorized with 0 comments 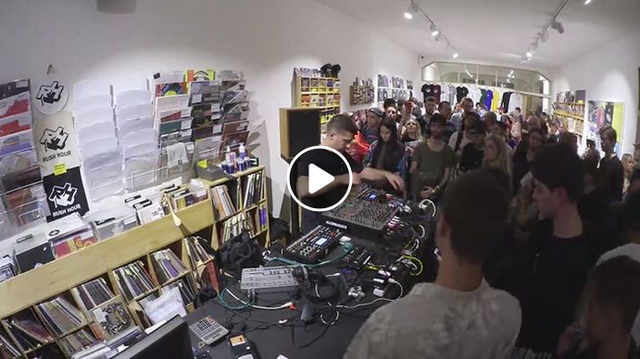 posted on October 18, 2018 in Uncategorized with 0 comments